A leading aviation Maintenance, Repair and Overhaul company provided dolphitech with a trailing edge section from the elevator of an Airbus A330/A340. The skins were CFRP laminates, with a Nomex honeycomb core. Inside the structure, a stiffener rib was present along the chord of the section, secured to the skins via rows of fasteners. The trailing edge itself was crimped by a folded aluminium sheet, held in place by a row of fasteners. Exposed surfaces were painted white in line with in-service conditions. 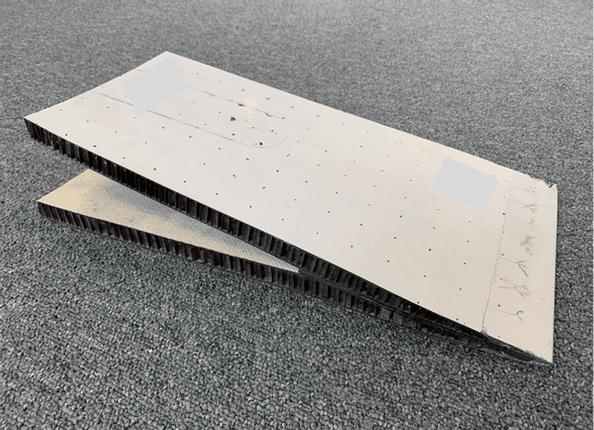 The sample was inspected using a dolphicam2 and a TRM-CI-5MHz transducer. This TRM has an 8mm Aqualene delay line, the flexibility of which provides conformance to surface unevenness. This was useful to maintain good contact over areas with slight indentations due to material transitions and the presence of fasteners. Water was used as a couplant, delivered via a spray bottle. The sample was inspected from both surfaces using a manual stitching technique, whereby the probe is moved sequentially over the surface of the specimen and data acquired at each location.

The component thickness and backing layer material vary significantly over the sample. This has traditionally meant that thorough prior knowledge of the interior component structure is required to interpret the data.

The trailing edge section was successfully inspected, with the individually honeycomb cells readily resolved. These showed a variation in amplitude response, the lower amplitude signals representing the possible presence of water ingress into the core. The internal rib region was also well-resolved. The increase in laminate thickness in the vicinity of the rib is visible as a light blue colour in the ToF C-scans. The dark blue colour represents the further penetration through to the inner surface of the rib flange. This therefore indicates regions of intact adhesive bonding between the skin and the rib, as the ultrasound was able to propagate through the interface between the skin and the rib flange. The various fasteners were also visible in both amplitude and ToF C-scan maps.

A TRM-CI-5MHz is ideally suited to inspection of a wide range of aerospace structures. This versatile transducer can map out C-scans with ease, and quickly reveal details of the internal structure without the requirement for any prior information.

Defence equipment is exposed to high stress levels and the dolphicam2 provides reliable testing of military kit to keeping military forces safe and able to perform.